Enoch walked with God, and he was not, for God took him..
– Genesis 5:24
This last Monday we launched “The Daily OT” listening plan, which takes you on a 929 day journey, listening through the Old Testament. Today’s reading is in Genesis 5, which contains the fascinating verse above.

You may have never heard of Enoch. He’s name only appears in a few genealogies in the Bible, once in Hebrews, and again in Jude. But his story has evoked a lot of interest and commentary. He was the seventh generation from Adam, the father of the oldest man recorded to have lived (Methuselah), and—the most interesting part of all—he never died.

“Enoch walked with God,” and then “he was not.” What does that even mean? And more strange still, “he was not, for God took him.” Truly a strange passage of scripture, if ever there was one. The “hall of faith” in Hebrews 11 records, “By faith Enoch was taken up so that he should not see death” (v. 5).

There are many things that we could speculate about Enoch, and his story. But the full details we’ll have to find out when we connect with him in eternity. But aside from all of those fascinating details we may one day learn, one thing we know for certain is worth thinking about as we head into another weekend, under the shadow of the Coronavirus.

Hebrews 11:5 gives us this important point; the reason for which Enoch’s name is listed in Hebrews 11: “before he was taken he had this testimony, that he pleased God.” How did this man of God, who walked with God and was not, please the Lord with whom he walked? The author of the Book of Hebrews answers the question for us in verse 6 …
But without faith it is impossible to please Him,
for he who comes to God must believe that He is,
and that He is a rewarder of those who diligently seek Him.
– Hebrews 11:6
The last 7 weeks have likely been a challenge and test for your faith. But if you simply believe that God is, and that He is the rewarder of those who diligently seek Him, then you too will be pleasing to God. And you can have this sure and steadfast hope, that as you walk, pursuing God by faith in this life, you will walk with Him in His presence forever.

I want to challenge you to try to memorize John 10:27-28, and then I’d ask you to mediate (think on) these words a bit this weekend. I’m asking you to do this, because, in the midst of all we are going through, these words are really important. They’re important because, if you are a believer in Jesus—one of His sheep—then you will follow Him. And if you are a follower of Jesus—one of His sheep—then He knows you, and He has promised to give you eternal life. Which means, you will never perish.

Yes, Coronavirus could kill you. So could a car accident, cancer, a bolt of lightning, a heart attack, a stoke, and too many Reese’s Peanut Butter Eggs (but what a wonderful death!). There’s no escaping this world without dying (you don’t need to correct me, by reminding me about the rapture. I know.). But if you are one of His sheep, you will never perish.

The Apostle Paul wrote, “For to me, to live is Christ, and to die is gain” (Philippians 1:21). In another place he wrote, “We are confident, yes, well pleased rather to be absent from the body and to be present with the Lord” (2 Corinthians 5:8). To be “well pleased … to be absent from the body” means that Paul was looking forward to death. How strange! Unless he fully believed that he would never perish.

I wish I could be with you all for church this weekend. Remember, church is the gathering of the people of God. So, I wish we could be gathered together, in person. But though we are “absent in the flesh,” we will be with one another in spirt. Don’t miss our online broadcasts at 9:00am, 10:45am, and 12:30pm on live.lifeinconnection.com.

P.S. We have a new offering for those of you who are looking for a pretty simple way to journey through the Old Testament of the Bible. Paul wrote in Romans 10 that “Faith comes by hearing, and hearing by the word of God” (v. 17). Which means you can greatly grow your faith by listening through he Scriptures. We’ve offered The Listening Plan for you to do that through the New Testament for nearly 5 years. But now we’re adding The Daily OT. Check it out and subscribe at TheDailyOT.com. 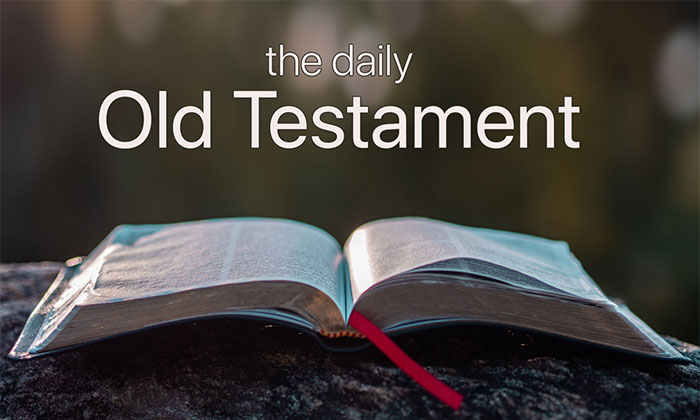 It’s a Sunday afternoon. Most Sunday afternoons I get home from the church, right about this time (it’s 2:15pm), after preaching 3 messages. Today was the third Sunday I didn’t do that, because the message was recorded on Video, and played (and watched) online. This, as they say, is the “new normal” for churches. It is a strange new normal. Especially in that this is Palm Sunday.

Palm Sunday and Easter (next Sunday) are really important “events” for pastors and churches. For all intents and purposes, they still are this year, but our celebration of them is entirely different. If you had asked me even two weeks ago if I thought we would be celebrating Palm Sunday and Easter online only, I would given an emphatic “no.” But here we are, our new normal.

I have to say, I am really grateful for our leadership and staff team. I feel that our team members have adapted to this very well, and—as the leader of this team—I’m super blessed. Though it has been a fair amount of work to get it all moving in a new direction. Additionally, I’m really interested in seeing how God uses these challenging circumstances to move His church out, into the new marketplace (which, in 2020, is not so new, at this point).

In Acts 8, God used trying circumstances to move the early church out of Jerusalem, and into Judea, Samaria, and the uttermost parts. Jesus had predicted this move in Acts 1:8. He promised that the Holy Spirit would fill and empower the Church, and that they would be witnesses in “Jerusalem, Judea, Samaria, and the uttermost parts.” But by Acts 8, the church was still in Jerusalem only. And it’s not like Acts 8 was only a few weeks after Acts 1. It is likely that Acts 8 was years after Acts 1. The church was stuck.

The earliest work I did in ‘ministry’ was helping the church I grew up in (which happens to be the church I now pastor) get content online. In 1996 and 1997 I helped the church build its very first website. At that time we started archiving my pastor’s audio messages online using Real Audio (some of you might remember that technology). In the (nearly) quarter century that has passed, I’m sad to say that a lot of churches still have a website that looks like it was made in 1996, and they didn’t—until recently—have much in the form of audio/video content on their broken and old site. But trying circumstances have changed that.

Yes, the content that is being put out by a lot of churches is not (yet) highly produced. But at least the content is out there, and now we can get better and better at it. This is a good thing, and I am rejoicing in these trying circumstances, because I believe God is going to use this for His glory, and for the growth of His Kingdom!

Because these cookies are strictly necessary to deliver the website, refusing them will have impact how our site functions. You always can block or delete cookies by changing your browser settings and force blocking all cookies on this website. But this will always prompt you to accept/refuse cookies when revisiting our site.