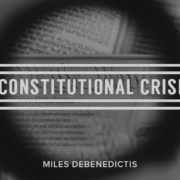 If you are paying attention, I think you will agree that the discourse in the United States over the last two years has been divisive. The vast majority of the division is political. But the partisan divide has manifest in the form of fissures of racial division, socioeconomic division, division between white and blue collar sectors — you name it; there are deep divides in our nation.

Though no one individual is to blame, where this division is concerned, the argument could be made that one of the chief conductors, at the head of this discordant orchestra, is our Commander in Chief, President Donald J. Trump. Merely highlighting this, and using his name, will be enough to cause some to stop reading and write me off just two paragraphs in. Please don’t. This isn’t about President Trump — neither for or against. But it is about an issue that he’s helped ignite into an outright wildfire, having to do with what some refer to as a “constitutional crisis.”

The American President has an open disdain for the “fake news media.” I feel strange even writing that, though I’m quoting him in doing so. But his contempt for his critics in the press has stirred quite a response from those in and among the media outlets he criticizes. As Newton’s third law states, “For every action, there is an equal and opposite reaction.” There has been an equal and opposite reaction for sure.

The press has responded to the president with equally hard-hitting editorial, comment and reporting. That is to be expected. And quite frankly, it is what we (if you are an American) should want. In the U.S., the press is sometimes called “the fourth branch of government.” It is the “Fourth Estate.” Thus when President Trump, this year, called the press “the enemy of the people,” he set a depth-charge that rattled the media establishment.

Perhaps you think that response is a bit extreme. There are those who have told me that the president is joking when he says these things. If not kidding, “It’s just rhetoric, playing to his base, but certainly not to be taken seriously.” On the other side, his words are considered dangerous, “a dog whistle inviting violence against the media,” and absolutely “unpresidential.” Wherever you land on this issue, you cannot argue that the press, and it’s freedoms, is not enshrined in the Constitution.

The First Amendment of the Constitution makes very clear that, “Congress shall make no law … abridging the freedom of speech, or of the press.” While not unique only to us, the constitutional guarantees regarding freedom of speech and the press are quite distinctive of the United States. We should be grateful that we have such rights firmly established, and we should be united in our opposition to any individual or group that would seek to restrict them.

Quite frankly, I do not believe that there is any serious attempt, in 21st century America, to restrict or “abridge” the freedom of speech or of the press. Sure, there are outliers and fringe dissidents who tweet and blog their objections. Indeed, the president has used his freedom of speech to do so. But I’m not yet convinced that such things have significantly harmed the press. No more so than their own bias and missteps have damaged them. And there is no legislative move on the freedoms of speech or the press.

But while I have yet to see any true attack — in recent times — against the freedoms of speech and the press, the same cannot be said for attacks against another aspect of the First Amendment.

If one carefully reads the First Amendment of the Constitution, it will quickly become clear that the single, 45-word sentence contains five liberties or rights:

3. Freedom of the press

5. Freedom to petition the government for a redress of grievances

In our day, nearly every time one appeals to the First Amendment, it is regarding the freedoms of speech or the press. Both of these liberties are important and even essential. But as our culture shifts, and as it becomes increasingly secular, there seem to be those who forget, or at least overlook, the first words of the First Amendment.

“Congress shall make no law respecting an establishment of religion, or prohibiting the free exercise thereof.”

To this point, the freedom of religion has not seriously been threatened because (1) the vast majority of Americans are still quite religious and (2) the Supreme Court has — so far — consistently upheld religious liberties. Though, the margin has been rather thin. And one of the chief reasons so many Christians voted for Donald Trump, while not strongly supporting him, was to maintain the slim Supreme Court margin.

THE NEED FOR CONSISTENCY

I am a wholesale supporter of the freedom of speech and the press. I don’t always like what people say, or how they express themselves; but I support their right to do so. I often disagree with the positions and perspectives of some in the media, but I’m grateful for the press and — for the most part — the work that journalists do.

As I said previously, we should be grateful that we have both free speech and a free press, and we should be united in our opposition to any individual or group that would seek to restrict these liberties. But I would have much more sympathy for those in the press if they were as ardent in their defense of the first right of the First Amendment as they are for the second and third. Unfortunately, that does not always seem to be the case. In fact, many of the journalists that are the most alarmed by the president’s rhetoric have been the least vocal in defense of the Little Sisters of the Poor, Hobby Lobby, the Masterpiece Cake Shop or the California crisis pregnancy centers, when their First Amendment rights were infringed.

FINALLY, A NOTE TO THOSE WHO ARE CHRISTIANS.

It is important we recognize that Paul understood his rights as a Roman citizen and wisely called upon them at the opportune time (Acts 22:25). We face a temptation to be silent. We can be afraid of rocking the boat. But the fact is, we need to be resolute about our faith, even if there is the potential of suffering as a result of doing so. But we also need to be vocal about our First Amendment right to freedom of religion. There is a reason that the founders determined to make it the first of our fundamental rights. But if we are silent when it is brushed aside, we may wake up one day to realize its power has all but disappeared from our society.

Want to join the discussion?
Feel free to contribute!

Act As if God Exists

Because these cookies are strictly necessary to deliver the website, refuseing them will have impact how our site functions. You always can block or delete cookies by changing your browser settings and force blocking all cookies on this website. But this will always prompt you to accept/refuse cookies when revisiting our site.