https://pastormiles.com/wp-content/uploads/2019/02/questions_podcast_logo_1400x1400.png 1408 1400 milesdebenedictis https://pastormiles.com/wp-content/uploads/2021/08/pm_logo_color_2021.svg milesdebenedictis2020-06-30 14:29:182020-06-30 14:29:20Episode 66 1/2 – Not Quite a New Episode ;)
“Ask, and it will be given to you; seek, and you will find;
knock, and it will be opened to you.
For everyone who asks receives, and he who seeks finds,
and to him who knocks it will be opened.”
– Matthew 7:7-8
Ask, seek, and knock. Each of these words are in the imperative mood in the original Greek. That means they are commands from our Lord. He commands you and I to pray. He commands us to bring our petitions to Him; to seek Him for an answer and to do so persistently. And then He promises “everyone who asks receives.” Those that seek, they shall find, and the one who persistently knocks, it will be opened.

The apostle James wrote of the prophet Elijah, “Elijah was a man with a nature like ours, and he prayed earnestly.”

This next month we are calling you to pray earnestly. We are asking you to ask, seek, and knock, brining your petitions and requests to the Lord for 31 days. And during that time, consider also social distancing from social media. To help you commit to prayer for 31 days in July, make sure you subscribe to our daily PrayerMinder, and follow along with us at PrayerMinder.org.

Also, during this time, as we continue provide physically distanced services as a Church, we are seeking to provide a way for the families within our church to promote the spiritual growth and discipleship of their children. If you’re interested in learning about our new program, and registering your kids (for free), please check it out at NewCity.lifeinconnection.com.
https://pastormiles.com/wp-content/uploads/2021/08/pm_logo_color_2021.svg 0 0 milesdebenedictis https://pastormiles.com/wp-content/uploads/2021/08/pm_logo_color_2021.svg milesdebenedictis2020-06-26 08:00:002020-06-26 00:35:42Ask! Seek! Knock!
A couple Sundays ago I shared from Deuteronomy 3 about the tribes of Reuben, Gad, and the half tribe of Manasseh. These two-and-a-half tribes inquired of Moses that they might receive the lot of their inheritance on the east side of the Jordan River. Effectively this possession was outside of the Promised Land, with a natural barrier (the Jordan River) dividing them from their brethren.

Commentators, scholars, and Bible teachers have been divided on this story for a very long time. The question of whether or not this division of the nation of Israel was according to God’s will, or not, will be answered (largely) according to how one views the sovereignty of God. Be that as it may, from an outcomes point of view, the division was ultimately not the best.

Almost as soon as Israel had rest in the promised land, and the men of Reuben, Gad, and the half tribe of Manasseh were released to return to their possession, the natural division between the two-and-a-half and the nine-and-a-half tribes descended into conflict. My third and final point in the message two Sundays ago was “Division in the nation inevitably leads to conflict.” 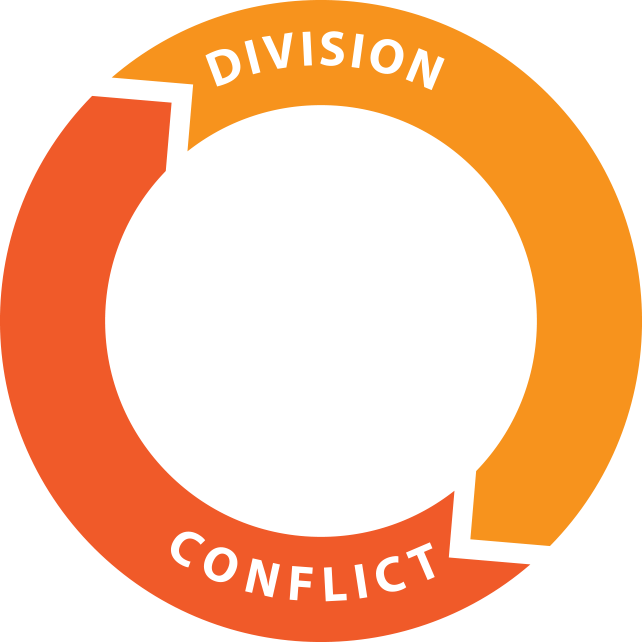 It is almost shocking how quickly division can lead to conflict. Every married couple knows this. If you and your spouse are divided on a decision, idea, or opinion, the division can lead to conflict in seconds. In more than twenty years of pastoral ministry, I’ve been a mediator—in counseling situations—between divided parties on many occasions. Countless times I’ve observed that division not only leads to conflict, but conflict fuels more division resulting in greater conflict, until things spiral out of control.

This is where we are as a nation. We are divided. Jesus said, “Every kingdom divided against itself is brought to desolation, and every city or house divided against itself will not stand” (Matt. 12:25) I am deeply troubled by the things that I am seeing in our nation. I think you probably are as well. While I am generally an optimistic person, and have (ultimately) an optimistic vision of the future (when Jesus returns and rules), the current conditions of our nation are troubling.

King David wrote:
Hear my cry, O God;
Attend to my prayer.
From the end of the earth I will cry to You,
When my heart is overwhelmed;
Lead me to the rock that is higher than I.
It is believed that these words were penned around the time that the King’s son, Absalom, mounted a coup against his father, leading (nearly) to a full civil war. Division leads to conflict. And during this time, one of the greatest things we can (and should) do is pray.

At the end of last year I sensed that 2020 was going to be a year of chaos. At that same time I attended a meeting led by Pastor Rick Warren at Saddleback Church. During the meeting, Pastor Rick said, “Wherever there is conflict and chaos God is getting ready to move.” Pray that God would move to bring true peace and order our chaos.

Beginning July 1st we are going to be seeking the Lord in prayer for thirty-one days. During that time, Pastor Mark will be providing daily direction on ways in which you can pray. I want to encourage you to do two things. First, consider social distancing from social media (and maybe even the news media) for 31 days in July. Second, follow along with us as we seek the Lord in prayer during that same period of time. If you’d like to receive our daily prayer-minders, subscribe at prayerminder.lifeinconnection.com.
https://pastormiles.com/wp-content/uploads/2021/08/pm_logo_color_2021.svg 0 0 milesdebenedictis https://pastormiles.com/wp-content/uploads/2021/08/pm_logo_color_2021.svg milesdebenedictis2020-06-19 09:00:002020-06-19 00:13:33Cultural Destabilization

Trust me, I have a point in making the confession … If you’ve ever watched a fight in UFC or boxing, you know that every match has a referee. The referee is there to make sure the fighters obey the rules (yes, there are rules in fighting sports). From time to time, when you’re watching a match, one of the fighters will be getting pummeled and the ref will have to jump in between the fighters to stop the match. Oftentimes, when that happens, the ref takes a punch or two, himself. No doubt, the ref doesn’t go into the ring expecting to get hit, but he knows that it goes with the territory of the job.

Again, I do have a point. I promise.

I’m sure you’ve noticed, there are a lot of fights going on right now. And I have observed that a lot of my brothers and sisters in Jesus have an impulse to jump into the fight, like a referee in a UFC or boxing match. I understand this impulse. Jesus said “Blessed are the peacemakers,” and Christians often have a deep desire to bring peace between waring parties. But if you jump in while the fists are flying, don’t be surprised if you get hit, and end up bloody.

A peacemaker is an individual who endeavors to reconcile those engaged in a disagreement. The desire to bring reconciliation and harmony is—I believe—a divinely inspired desire. But it is only possible if we recognize and understand where such reconciliation and peace are found. These are only found in and through the Gospel.
For He Himself is our peace, who has made both one, and has broken down the middle wall of separation,
having abolished in His flesh the enmity, that is, the law of commandments contained in ordinances, so as to create in Himself one new man from the two, thus making peace, and that He might reconcile them both to God in one body through the cross, thereby putting to death the enmity. And He came and preached peace to you who were afar off and to those who were near. For through Him we both have access by one Spirit to the Father.
– Ephesians 2:14-18
The divisions of this world are always and ultimately the result of sin. And only Jesus—the Prince of Peace—can bring salvation from sin. So, don’t be a ref. Be a peacemaker. Preach peace in Jesus. Every other message will eventually fall flat, and is likely to get you hit.
https://pastormiles.com/wp-content/uploads/2021/08/pm_logo_color_2021.svg 0 0 milesdebenedictis https://pastormiles.com/wp-content/uploads/2021/08/pm_logo_color_2021.svg milesdebenedictis2020-06-05 09:00:002020-06-05 00:07:17Blessed Are The Peacemakers
Scroll to top

Because these cookies are strictly necessary to deliver the website, refusing them will have impact how our site functions. You always can block or delete cookies by changing your browser settings and force blocking all cookies on this website. But this will always prompt you to accept/refuse cookies when revisiting our site.